Ever wonder what’s ripe at the Crescent City Farmers Market this week? Who will be there? Who is cookin’? Sign up here for our popular electronic newsletter Market Morsels to learn recipes, market updates, and food preparation tips from our own vendors, chefs, and shoppers. It’s published each Monday so you can prepare to shop for the week!

Thanks for signing up!

The holidays are here! And as the Festival of Lights begins, it’s time to break out that frying pan and get to making latkes again! Traditionally made with potatoes and fried in oil, latkes celebrate the lasting of the holy light, symbolizing hope. Carrots are in season right now and we’re hoping you’ll like this savory and slightly sweet carrot and apple latke recipe from Edible Mosaic. Chag Urim Sameach! 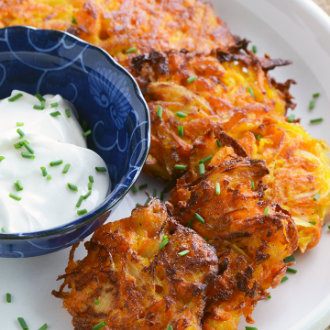 As soon as you shred the apple, toss it together with the lemon juice in a medium bowl. Stir in the carrot, onion, garlic, salt, black pepper, ginger, and cinnamon, then stir in the egg. Stir in the flour just until incorporated, being careful not to over-mix.

Once the oil is hot, use a 1½ tablespoon scoop to measure the batter into the oil, being careful not to over-crowd the skillet. Cook the latkes until golden on both sides, about 2 to 4 minutes per side, flipping once. (You can adjust the heat down as necessary so the latkes don’t cook too quickly.) Transfer the cooked latkes to a paper towel-lined plate to drain excess oil, and cook the rest of the batter the same way. (Using a 1½ tablespoon scoop, you should get about 16 to 18 latkes.)

Serve hot with minced fresh chives sprinkled on top, along with sour cream and/or applesauce.

Market Umbrella is an independent nonprofit 501(c)(3), based in New Orleans, whose mission is to cultivate the field of public markets for public good. Market Umbrella has operated the Crescent City Farmers Markets (CCFM) since 1995.